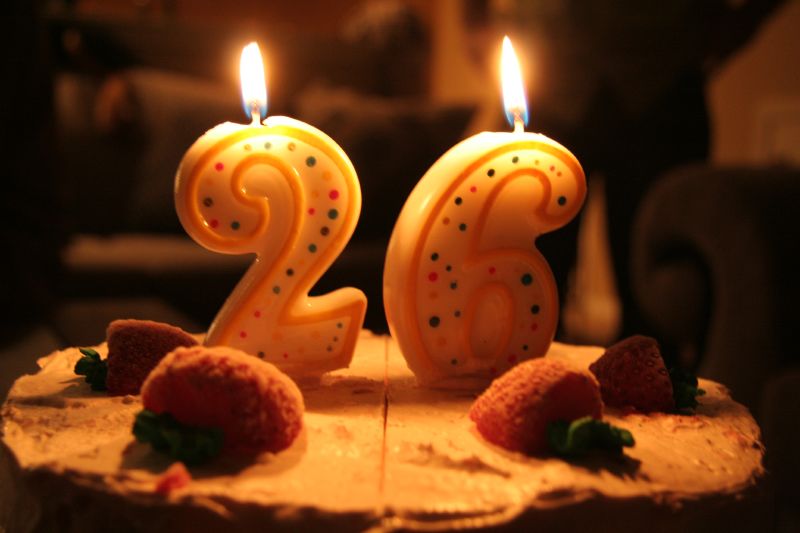 I’m officially 26 years old. My birthday was on the 25th of January.

This year was a lot of things. In summary, here’s how it all went down:

– January I interviewed for a new job out-of-state and turned 25.
– In February I packed up my belongings and moved from Delaware to Virginia, leaving my boyfriend of 1.5 years behind. On the 28th I bought my first brand new car — a Subaru Impreza.
– March I lost my paternal grandmother; went to the funeral for my dad.
– April was spent learning the Richmond area and apartment hunting.
– During May we helped my oldest sister find her perfect dress for her summer wedding. I got approved for a beautiful apartment on the third floor with vaulted ceilings and a balcony that I could walk out to from the living room and bedroom.
–June I went to my university’s alumni weekend, attended two friends’ wedding who have been together since college, and applied to adopt a puppy from a foundation in Aruba.
– July 14th I moved into the apartment then drove from Virginia to Delaware so that my boyfriend and I could drive together to JFK in New York to pick up our new puppy (yes, all in one day). I decided to quit my job for my mental health and move back to Delaware. The end of the month we threw a surprise bridal shower for my sister.
– In August my boyfriend came down to Virginia to help me pack up, we drove back to Delaware to stay with his family while we save, and I got hired for a part-time position. The 12th was my sister’s bachelorette party and her wedding was on the 18th — it was beautiful.
– September was spent working, saving money and training my puppy, Mija (Mee-ha). Breaking the lease for the apartment early led to financial struggles for quite some time. Job hunting started; over 50 applications.
– October 7th was my boyfriend’s birthday, all I could afford was a card (barely) but his family took everyone out to dinner to celebrate. Halloween was celebrated at our friends’ house who had a huge party — I was Eleven from Stranger Things, bloody nose and all. I got accepted for a new position; full time hours, only working M-F with benefits.
– My first day of orientation was November 5th; I’ve been working there since. Thanksgiving was hosted at my boyfriend’s family’s house; there was nearly 15 people for dinner and it was finally a Thanksgiving that I didn’t think about my Aunt missing. I felt guilty, but happy. My sister got admitted to the hospital a few days later, she’s been doing much better since but her health is always on my mind now.
– December feels like a blur until Christmas. On the 12th my office had a staff meeting that pretty much was just White Elephant, I got a gingerbread house kit and a bottle of wine. A few days later I spent a night with my boyfriend and his cousins putting it together. The 16th we began celebrating Novena at home (a Colombian tradition with prayers and songs that involves the family getting together every night before Christmas). The 23rd my middle sister and I drove into Philadelphia to see a few of our girlfriends from high school that I haven’t been able to see in years. We went to brunch and spent some time catching up. Christmas Eve my mom drove into town. I first went to spend a few hours with her and my sisters, as tradition always has been, where we each opened one gift: pajamas to sleep in. I went back home and celebrated Christmas the way Colombians do (at least, how my boyfriend and his family always have done); drinks, games and gift-opening right around midnight. Christmas day was back at my sister’s house; everyone made dishes to bring to take some physical and financial stress off my sister. We ate a lot of snacks, played games, chatted, had a wonderful dinner and all did a White Elephant gift exchange as a family. New Years Eve my boyfriend and I went to my sister and her husband’s house to celebrate. We played music, drank a lot and lit off some (legal) fireworks when the clock struck midnight.
– January: 2019 is officially here. This year feels like it’s going to be different, full of good and expected changes. I feel more like I have a true plan and path this year. I’m also writing publicly a lot more (which is my resolution, after all). I did, though, lose two family members within two weeks of each other this month. I sadly was not as close to either of them as I once was when I was younger, but they always made me feel welcomed and loved in all the memories I have of them. January 9th was the first service, January 25th being the second — a very odd way to spend a birthday, for sure. But I didn’t mind, it wasn’t about me, I was there for family. My birthday never was that big of a deal to me.

This year though, my boyfriend (and his family) made it especially different. Now we’ve been together for two and a half years and have been living together for six months. Since I was out of town for the funeral services on my actual birthday I wasn’t home until nearly 11pm. Once I walked in the door I was surprised with a chorus of the ‘Happy Birthday’ song from him and his family as well as an Oreo ice cream birthday cake (I mentioned I wanted an ice cream cake IF there was a plan for any cake [last year I didn’t have one]). We had a piece, I opened my two cards; one from him, the other from his two cousins (who gave me two Reese’s and a KitKat bar) and went to bed. My boyfriend woke me up with to two large pancakes IN BED (which his dad made specifically because of my birthday) — I brought them to the table after a few bites and waking up a little more, where I was greeted again with the ‘Happy Birthday’ song by his family and him. I received another card, this one from his parents, and relaxed until lunch. His dad, again, made the meal specifically for my birthday: handmade personal pizzas. Later that night we met up with our friends to pregame and have late-night food at a local bar where a live band from Dallas, Texas was playing. A good friend of mine then showed up after he was done work around 12:30 AM in order to celebrate with me; the same friend who pushes me more than anyone to keep writing (and often). I can’t remember the last time, if ever, that I’ve had such a thoughtful group of people to celebrate my birthday with me. I appreciate each and every one of them.

Some opportunities have been surfacing and I think I’ll finally be able to do a lot of things I’ve been wanting for quite a long time. What I’ve learned from this past year, though, as I look back on all that happened is that the only way to live is to do what will make you happy. It’s that simple.
— I took a job in a new and exciting city… left because I was unhappy and worried about my mental health.
— I rescued an abandoned puppy… she’s here for me and I’m here for her.
— I moved back with ‘parents’ to save money… my financial stress is gone.
— I’ve changed more jobs within the past year than I ever have in all of my years of working (I held my first job for 7 years)… my mental health is clear and I’m learning what I’m not willing to do for a living.
— I’ve been going to countless doctor’s appointments (eye appointment, physical, therapist, etc.)… I am healthy in all aspects of life.
— I write often and about what I want… I don’t get as anxious with so many thoughts bouncing around in my head.
They may not seem like ‘happy things’; some may seem drastic, or stupid, or impulsive or irresponsible, but I’m the happiest I’ve been since I can remember. And I like it.